Introduction
Getting Started
Two Fish that will give you everything you need
Speckled Trout
Redfish
Fishing Tackle
Live Bait
Understanding How and Why the Water Moves
Find Speckled Trout and Redfish
Intro to Google Earth (Advanced Inshore Navigation)
Find the Best Fishing Spots w/ Google Earth
Discover Safe Routes & Avoid Dangerous Water
How to Create Routes and Fishing Spots for Your GPS
What to do when you get to your first fishing spot.
What to do if you don't catch fish
The Ultimate Key to Angling Success
Congrats! You're done!
Additional Support

Knowing this is the key to understanding Louisiana's inshore fishery. Without this knowledge you will never build the solid foundation you need to succeed.

In Louisiana we have a lot of rivers, but there is one that stands out from them all. She defines more than a good bit of our state border, she defined our geography and, ultimately, an entire fishery.

She is called “The Mighty Mississippi” with good reason. She is gargantuan. She is wide, runs deep and is characterized by a muddy water.

There is no other river like her in North America. She drains land running from as far east as New York state to as far west as Wyoming.

As that water comes down from those areas, it stirs up the bottom and sides of the channel, dislodging sediment and carrying it in the current. This is what gives the Mississippi River the appearance of being muddy. That muddy water is really just particles of sediment suspended in the water. The sediment can be really fine dust or heavier grains of sand.

Eventually the sediment will travel down the river to a point where the water slows down. This happens all along the river, but especially towards the mouth of the river. Once the current weakens it is no longer strong enough to keep the sediment suspended. The sediment will then fall to the bottom of the water. If enough falls out of suspension the river will become shallower and eventually give way to dry land.

Yes, that suspended sediment is really just suspended land with the Mighty Mississippi acting like a conveyor belt bringing it to a new area. This new area is what Louisiana is today.

The Mississippi River has spent thousands of years flowing back and forth, grabbing land from one part of the country and taking it downstream to build today's Louisiana. In some cases she has been documented as literally devouring tracts of land and ingesting them before spitting them out further downstream. 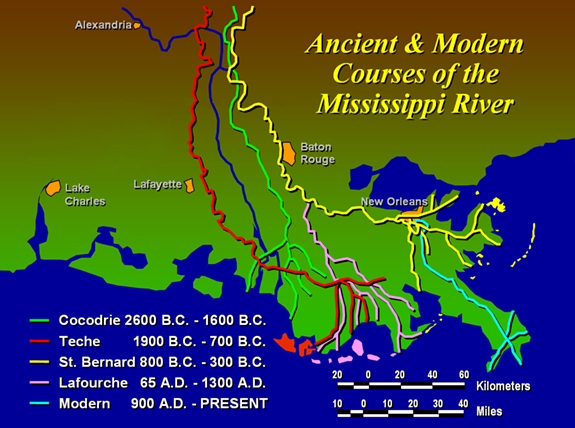 As time passed, the giant river pushed deeper into the Gulf of Mexico, building land in one direction before changing course, following a path of lesser resistance and building new land.

Some water would still flow down these old paths and today they are referred to as bayous. You can look at any map and easily spot out these ancient paths of the Mississippi River. They are not short and winding like most bayous, but run far, straight and true. They go by names such as Bayou Terre aux Boeuf and Bayou La Loutre in St. Bernard Parish. There is Bayou Lafourche in Lafourche Parish and many more bayous of lesser significance that played a role in building solid land over eons. 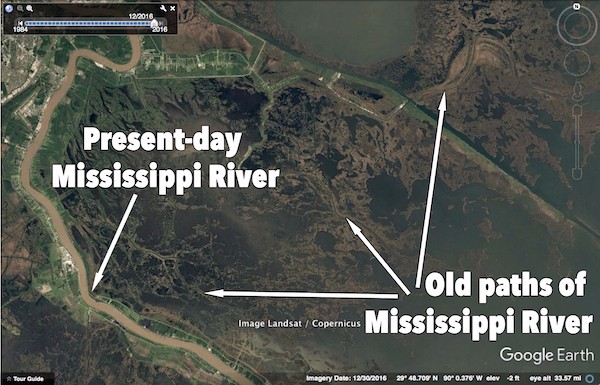